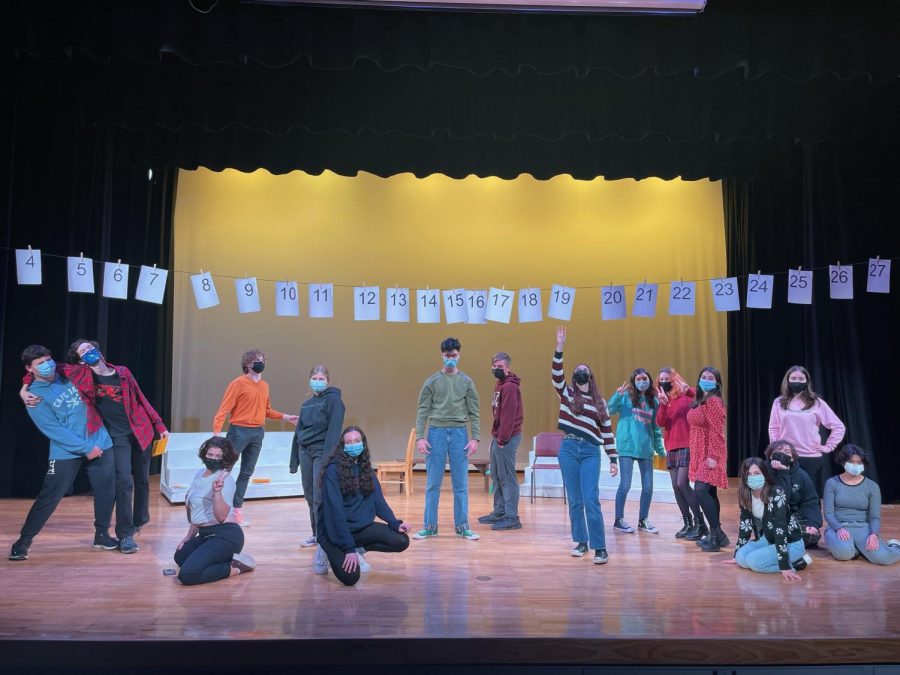 A sea of audience members rush to their seats around you. You look at the stage. A clothesline with papers numbered 1 through 30 looms above the stage. You notice a large basketball clock projected onto the stage. Why could that be? This is not a sporting event.

This year, the Spotlight Players will be presenting  Too Much Light Makes The Baby Go Blind: 30 Plays in 60 Minutes as their fall drama. The show opens Thursday, November 18 and runs through to Saturday the 20 with a 2 p.m. matinee. The goal of the show is to have the actors complete all 30 short plays before reaching the 60-minute time limit as the audience calls each show they’d like to see out. If a scene extends over two minutes, they will be stopped.

Tickets are $10 per person for adults, and prices differ for students and senior citizens.

While the randomized order of the plays may seem intimidating to some, the Spotlight Players are not sweating it. The club members have pulled off a show like this before. The 2020 spring musical The Mystery of Edwin Drood involved the audience members in decision making as well. The show used a format of multiple alternate endings, while having the audience decide the fate of the characters each night.  For Edwin Drood, faculty adviser Steven Munoz had the Spotlight Players rehearse all of the possible endings so they would be comfortable with interchanging them  So while Too Much Light Makes the Baby Go Blind may seem like an ambitious pick, the actors are well-prepared for a show like this one.

The show, written by Greg Allen, is not your average play. The play’s genre is described as “neo-futurist” – a term coined by Allen. According to neofuturism.org, the genre can best be described as “an ever-evolving, multi-faceted theatrical aesthetic built on a belief in truthful, direct communication between the performer and the audience.”

“It’s unlike any production we have ever put on before” assured senior Alyssa Lipesky, who works as the assistant director. “It is definitely something worth seeing. Some audience members may even be lucky enough to end up onstage before the end of the show,” Lipesky continues. She then went on to describe how the actors directly address the audience members in between scenes, urging them to pick a number off of the clothesline for them to perform.

“No two shows will be performed the same. Each night of the show, the play is performed differently,” senior and cast member Michael Murphy promises. Depending on what the audience wants, some shows may be completed before the 60 minute cutoff, while others may not. It all lies in the hands of the actors onstage, and only with the cooperation of the audience is this possible. “Think of it as a group effort.” Murphy adds.

The students in the play this year range from sophomores to seniors. There are approximately 20 performers in the production and additional cast members working on other aspects of the show including costumes, makeup, set, and lighting.

According to Mr. Munoz, in his sixth year at the helm of the Spotlight Players, this play creates challenges that he knows his students can handle.

“It is cool and unique, and something different that we have not done before, and it will be interesting to see how everyone pans out,” sophomore Lauren Ryan says. Lauren, who is in five scenes, says the random scene order is exciting, it also makes her nervous.

“I won’t know what to expect, and I won’t have time to think,” she explains.

This is Lauren’s first fall drama play with the Spotlight Players, whom she joined last spring to participate in the spring musical, Broadway through the Ages. Her character was part of a girl group and performed scenes from Hairspray and South Pacific.

Lauren, who says she has been performing since she was five years old at family parties and dance class, describes the play as “comical and wacky”. Her favorite scene is called “This play does not exist” – a skit is about a play that most people believe does not exist, but her character is passionate that it does exist.  She says it takes her “out of her comfort zone” as she has to scream on stage.

To prepare, there are around four rehearsals a week, each lasting two hours. There will be more rehearsals leading up to show week.

Mr.Munoz says chose this unique play because he wanted to do something that would allow him to have a flexible rehearsal schedule while we are still living in Covid time. He also wanted something that could go digital if they needed to go into lockdown. This play gives him a lot of options, along with the audience.

“The audience will be caught by surprise in a good way. It will keep them on the edge of their seats,” says Ryan, who adds that he is “looking forward to being able to perform live indoor theater again with so many talented people.”

“I predict it will be very fun, and I hope we will get a nice big audience to enjoy how wacky and weird the scenes are,” Mr.Munoz stated.

To support their foundation, the SPPA (Spotlight Players Parent Association) is planning upcoming fundraisers, including a table at the town Fair in the Square, December 4.