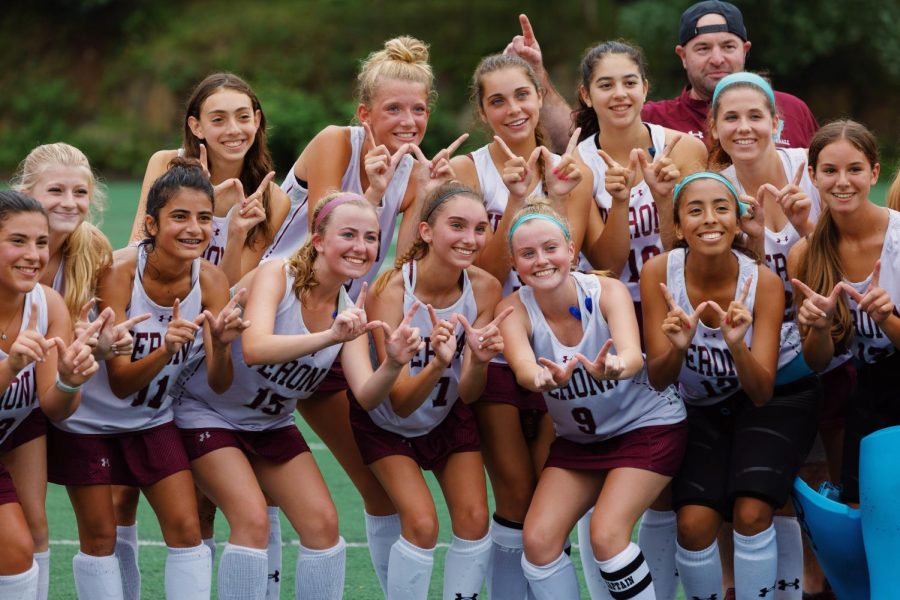 Cheers from the crowd of parents and mixed groups of students erupted on September 9, 2021 as the Verona Field Hockey team entered the Centennial Field for their first Varsity game.

Yes, that was stated correctly. Not a player’s first varsity game, but an entire team’s.

After two seasons of competing as a junior varsity team, the field hockey team was ready to compete at the varsity level for the first time since 1979, with a new coach and a new conference.

Julia Balogh, a junior who has been a member of the team since her freshman year, believes that multiple factors allowed the team to evolve. “As well as being a varsity team this year, a new coach has also caused many changes to our dynamic as a team.”

After playing two JV seasons under the direction of coach Kristin Cassano, the program decided to go in a new direction for the start of the 2021 season. In July, the team was introduced to Sarah Weber, their new head coach who was eager to help the girls improve their skills.

The team did much work over the summer, and was well prepared for the season’s start in September. They aimed to be ready to match the skill level and intensity of varsity teams they would be competing against in the coming months.

Amanda Cavallo, another junior who has been a member of the team since her freshman year, talked about the team’s mindset going into their first varsity season:

“Changing from a JV team to a varsity team has made our schedule a lot more competitive and tougher, but we have improved a lot and are ready to play just as hard as the other teams in our league.”

Due to the fact that the team’s two years as a JV sport had left the team without a single win, it was apparent that the odds would be stacked against them throughout their first Varsity season. They would face talented teams such as Glen Ridge, Newark Academy, Westfield, and many more.

“We definitely went into the season as underdogs. Everyone expected us to be the same team we were last year, which is definitely not true,” stated junior midfielder, Julia Komninos.

It came as a shock to many when the girls began their season with a 1-0 win over Mount Saint Dominic Academy, followed by a 4-1 win over Koinonia Academy. It was obvious that the team was prepared to start their season off with a statement, as the girls acquired the program’s first varsity win in more than 40 years.

Sarah Knoetig, the team’s leading scorer, stated that she is delighted at how the season is unfolding. “I’m proud that we have been able to show everyone how we’ve improved over the last two years, and that we are ready for the next level.”